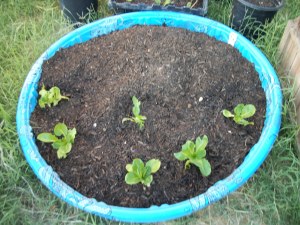 A black bird hit our window today. It was a quite a shock and made me jump. “Don’t be dead”, I thought as I ran outside to see the fate of the bird. It was on the grass flopping around in a startled little dance. Now, I normally don’t talk to animals, but it looked so helpless trying to relearn how to fly after the startle of hitting our office window. My teacher instincts  kicked in, because I told the bird that it was bruised, scared but it still had the ability to get up and fly. The bird did eventually stop fluttering around the yard and flew away. I went back into the house and wrote a little poem for the bird in my poem journal.

Bruised. Shaken up. A bit scared from everything but still in one piece.

But I am not broken.

It might be time to move on and fly.

(Note about the picture: The bird  flew away before I could get a picture so I took a picture of my garden instead.)