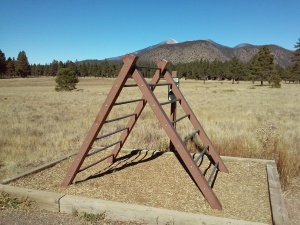 I have lots of fears including heights, natural disasters, people laughing at me, walking across the street and getting hit by a car, getting trapped in an elevator and a bunch of other things.  (In case you are wondering, I’ve been stuck in two elevators in my life. I absolutely refuse to take elevators at the mall ever again since both of my experiences were at the mall.)  I especially don’t like heights so I walked right on by this ladder of doom at the park. The Accountant easily climbed over and he encouraged me to try it too. I imagined falling off the ladder, breaking  my leg and then having to explain to everyone how I broke my leg. I was certain that people would laugh when they heard how I broke a leg climbing a ladder at the park. Cue the next 30 minutes of walking away from the ladder and then coming back to it.

I eventually decided just to do it. I got up to the top where half of me was hanging over one side and the other half was hanging over the other side. Cue the panic feelings. My legs refused to move. I knew I needed to kick my right leg over to the left side if I was ever going to get down. I couldn’t get my right leg to move though. I was stuck! Cue the crying. I couldn’t get down. Cue the frantic prayer telling God that I was completely stuck, a bit embarrassed and maybe he could just send an angel to get me off this silly ladder even though it was my own fault for climbing up the thing in the first place. That’s the other thing about me. I’m scared of lots of things, but I also have this ability to just jump in and do things.

That is where I found myself yesterday. Really scared but having been brave and put myself in a situation where I’d be really scared. I finally got enough courage to move my right leg to the side with my left leg and climb back down. My legs were shaking all the way down and I was glad to be on the ground again. The Accountant was so proud of me and he jumped up and down with excitement. Cue the deeply analytical Amee. The entire walk back to the car I was thinking.

I’ve struggled with anxiety for as long as I can remember. My first memory of being afraid was when I was three. I honestly can’t think of a time in my life when I didn’t have some fear of some kind. Yet, over the years I’ve done many things that really scare me. Driving terrified me. I was almost 19 before I got my license and I was over 25 before I finally started driving on the freeway. I’ve driven all over the country now on various road trips.  I wouldn’t say that I love driving, but I do it.  It’s like my biggest weakness is also my biggest strength. It’s something to think about. What are your strengths? What are your weaknesses?